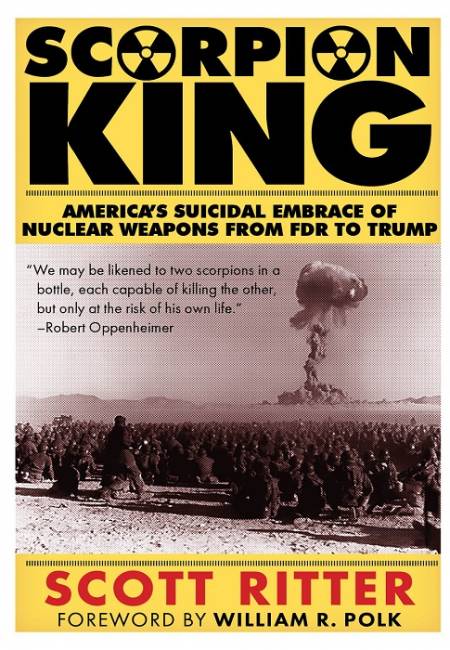 Providing a vivid and gripping A-Z history of America’s deceptive use of arms control as a means of actually furthering its quest for nuclear dominance, Ritter sheds light on a contradictory US agenda little understood by the lay reader, while providing sufficient detail and context to engage the specialist.

“A comprehensive and illuminating account of America’s paralyzing infatuation with nuclear weapons.” —ANDREW BACEVICH, President of the Quincy Institute for Responsible Statecraft
“Scott Ritter’s Scorpion King is an important and necessary wake-up call. This book should be required reading for political leaders, media pundits, and citizens who want to leave a future to our children and grandchildren.”—JACK J. MATLOCK, JR,  author of Superpower Illusions: How Myths and False Ideologies Led America Astray

“Scorpion King is must reading for all those who should be concerned about the danger of our nuclear weapons policies. That’s everyone.” —DANIEL ELLSBERG, author of  The Doomsday Machine: Confessions of a Cold War Planner

“Ritter details how decades of failed attempts to break the U.S. addiction to nuclear weapons have led to a dead-end, trillion-dollar modernization plan to produce more “usable” nukes. But as Ritter so brilliantly argues, giving up is not an option. Read the book to understand why, and get inspired to take action.”—MEDEA BENJAMIN, codirector, CODEPINK for Peace

SCOTT RITTER is a former Marine intelligence officer who served in the former Soviet Union, implementing arms control agreements, and on the staff of General Norman Schwartzkopf during the Gulf War, where he played a critical role in the hunt for Iraqi SCUD missiles. From 1991 until 1998, Mr. Ritter served as a Chief Inspector for the United Nations in Iraq, leading the search for Iraq’s proscribed weapons of mass destruction. Mr. Ritter was a vocal critic of the American decision to go to war with Iraq. He resides in Upstate New York, where he writes on issues pertaining to arms control, the Middle East and national security. Dealbreaker is Mr. Ritter’s eighth book.