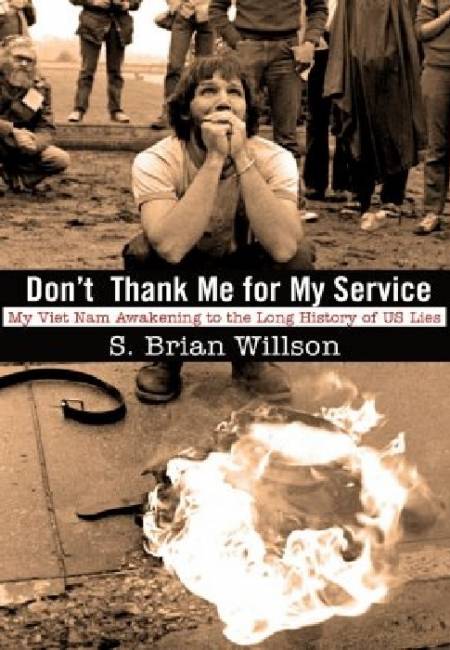 Viet Nam veteran S. Brian Willson was so shocked by the diabolical nature of the US war against Viet Nam — irreversible knowledge, as he describes it — and his own appalling ignorance from his cultural conditioning, that it sparked a lifetime of anti-war activism.

“…this is a MUST READ for all of us. The alternative is ever more dangerous perpetual wars.” DANIEL ELLSBERG, The Pentagon Papers and The Doomsday Machine: Confessions of a Nuclear War Planner

“In a time when the daily news keeps track of the vast number of lies our President tweets to his unthinking base, Brian Willson’s reading of history rings like the peeling of the Liberty Bell. I haven’t seen Brian in a long time, but he hasn’t changed. I urge every reader of The Veteran to read this book. Buy two copies, and give one to a teenager near you. I would rate Don’t Thank Me for My Service as highly, highly, highly recommended!” JOHN KETWIG, The Veteran

“By providing the historical context for our involvement in Viet Nam,  Willson pulls back a curtain on U.S. imperialism that cannot easily be closed again.” MARTIN SHEEN

S. BRIAN WILLSON commanded an AF combat security unit in Viet Nam. He has helped create a host of veterans actions against war, and as a lawyer critiques the US criminal justice system and its foreign policies. Willson received the Peace Abbey Courage of Conscience Award at the Kennedy Library and Museum in 1992, and in addition to his JD, holds two honorary degrees (LL.D. and Ph.D.). Author of On Third World Legs and Blood on the Tracks, he is the subject of a 2016 documentary, “Paying the Price For Peace: The Story of S. Brian Willson.”
While peacefully blocking US weapons to Central America, he lost both legs, and now walks (or dances) via prostheses.