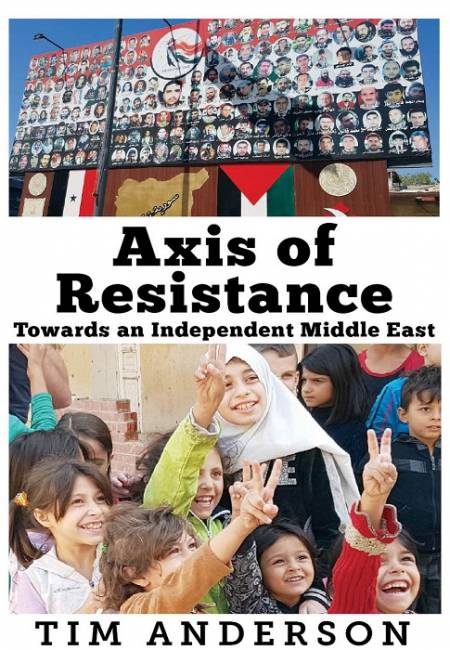 In the series of 21st century wars initiated by Washington in the name of a ‘New Middle East’, resistance forces are prevailing. Like all imperial gambits before it the US-led plan has been to subjugate the entire region – whether through the direct application of force, or through coalitions or proxies – to secure privileged access to its tremendous resources and then dictate terms of access to all other players.  This book addresses myths about the wars and the resistance, while attempting a partial and provisional history of the conflicts.

“Western policy has been worse than a crime it’s been a blunder. Tim Anderson’s epic study shows what a crime, what a blunder it has been… It is a must read.” GEORGE GALLOWAY, British politician

“Axis of Resistance will take its place alongside the few books worth reading on how and by whom the flickering lights of the imperial twilight of ‘the West’ in the Middle East were finally extinguished.”  DR. JEREMY SALT, Middle East historian, former professor Melbourne University and Birkeit University

Dr TIM ANDERSON is Director of the Centre for Counter Hegemonic Studies. He was for 20 years an academic in Political Economy at the University of Sydney and before that taught at other Australian universities. He researches and writes on development, rights and self-determination in Latin America, the Asia-Pacific and the Middle East. He has published dozens of articles in a range of academic books and journals. His most recent books are: Land and Livelihoods in Papua New Guinea (2015), and The Dirty War on Syria (2016, in ten languages).