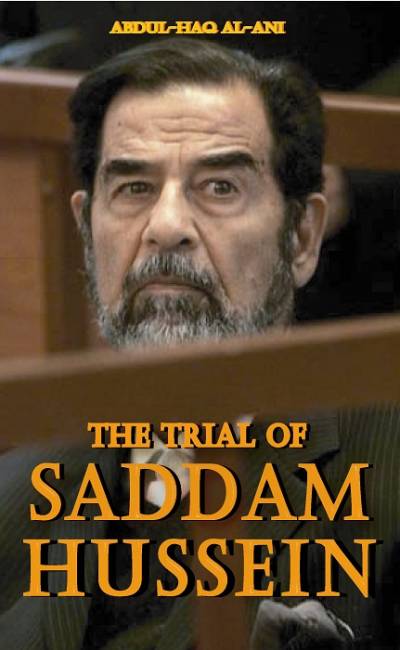 Al-Ani documents the trail of illegalities marking the destruction of Iraq at the hands of the US and UK, from the genocidal sanctions of the 1990s, the US State Department pre-invasion planning that commenced in 2001, and the 2003 invasion, to the setting up and proceedings of the tribunal that swiftly dispatched Saddam Hussein.

“For the real story of the 'criminal behavior of the United States, its foreign lobbyists and its partisans in this historic trial", knowledgeable readers will always turn to Al-Ani's immensely sobering expose." DAVID MACGREGOR, King's University College, University of Western Ontario

“For those who like to know both sides of any story, Abdul Haq al-Ani’s book is a worthwhile if heavy-going read…..” TAM DALYELL  former Senior Member of Parliament, Labour Party

ABDUL-HAQ AL-ANI is an Iraqi-born, British-trained barrister who served as a legal adviser on Saddam Hussein’s defense to his daughter, Raghad Saddam Hussein. Called to the Bar in 1996, he holds a PhD in Electronics Engineering and a PhD in International law. Founding editor of The Arab Review, he has written widely on culture, politics and religion. He joined the Ba’ath party while in his his teens, but left it in disappointment a few years later, prior to the Ba’ath Party assuming power in 1968. He is also author of the two-volume Genocide in Iraq, co-authored with Tarik al-Ani.