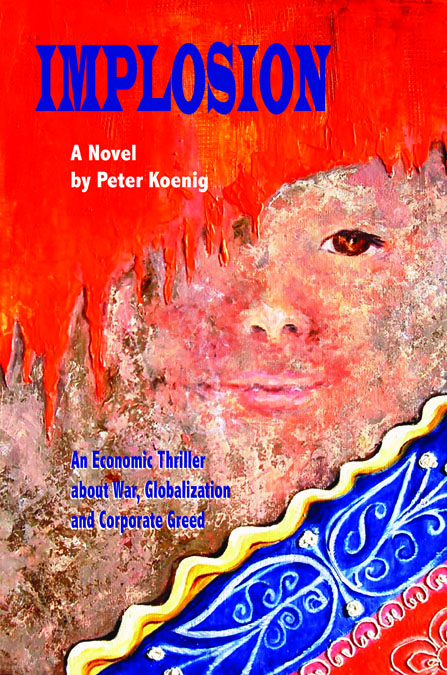 In this riveting economic thriller, Paul Jordan, a renegade World Banker, and Moni Cheng, an Andean woman who leads a socio-environmental nongovernmental organization in the Peruvian Amazon, endure kidnappings, bombings, and deadly chases in their fight against boundless capitalism, destructive economic policies, and corporate greed that are wreaking worldwide social injustice and destroying the globe's richest zones of biodiversity.

Together, Jordan and Cheng expose corporate ruthlessness, military brutality, and Machiavellian economic policies of the foremost financial ivory towers of Washington, the World Bank, and the International Monetary Fund.

Richly detailed, grounded in actual events and statistics, and complete with notes from author and former World Bank economist Peter Koenig, Implosion is both an unsettling, gripping novel and a powerful commentary on the realities of the modern world's corporatocracy.

PETER KOENIG is an economist and geopolitical analyst. He is also a former World Bank staff and worked extensively around the world in the fields of environment and water resources. He lectures at universities in the US, Europe and South America. He writes regularly for Global Research, ICH, RT, Sputnik, PressTV, The 4th Media, TeleSUR, TruePublica, The Vineyard of The Saker Blog, and other internet sites.