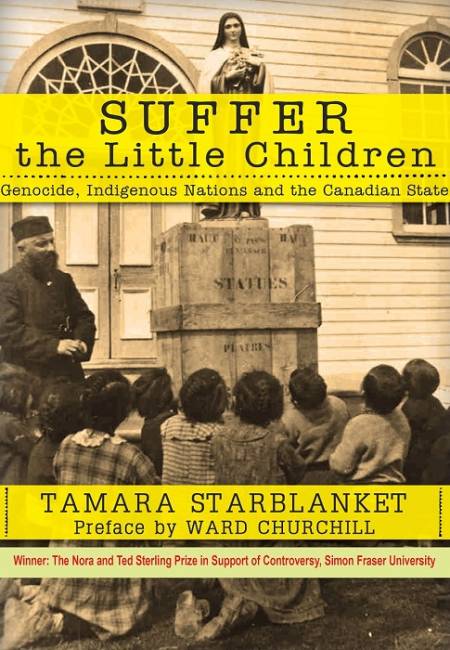 “Throughout the book Starblanket demonstrates a broad knowledge of both history and law.  The documentation is vast and precise… a tour de force…” ALFRED DE ZAYAS,  former UN Independent Expert on the Promotion of a Democratic and Equitable International Order,  International Indigenous Policy Review, Volume 10, 4, 2019.

“As Starblanket demonstrates, precisely and conclusively, this programme of organized, racist, colonial violence amounts to genocide, as the crime has been defined in international law.” DARRYL BARTHE, Decolonization of Criminology and Justice 2(1),

“[B]elongs on the reading list of anyone concerned with social justice and addressing the ongoing colonialism on which the Canadian nation-state stands.” AZIZ CHOUDRY,   STUDIES IN SOCIAL JUSTICE

“Suffer the Little Children is a path-breaking text that rigorously and robustly documents the numerous ways in which the Canadian state has and continues to commit genocide against Indigenous peoples of Turtle Island.” TRAVIS HAY, THE JOURNAL OF TEACHING AND LEARNING

“An effective analysis of the legal structures the Canadian state set up to accomplish its objective: the complete absorption of indigenous peoples into the dominant European culture, to solve the “Indian problem…” CHRISTOPHER BLACK, International Lawyer, ANISHINABEK NEWS

“Starblanket’s book is an important, thought-provoking, and timely interdisciplinary contribution to the field of law, history, and Indigenous Studies that will push readers to reconceptualize colonization and the characterization of residential schools as genocidal.” CARLING BENINGER, BC STUDIES

TAMARA STARBLANKET is Spider Woman, a Nehiyaw iskwew (Cree woman) from Ahtahkakoop First Nation in Treaty Six. Tamara holds an LLM (master of laws) from the University of Saskatchewan, and an LLB from the University of British Columbia. She is the Dean of Academics at Native Education College on the unceded lands of the xʷməθkʷəy̓əm (Musqueam), Sḵwx̱wú7mesh (Squamish), Səl̓ílwətaʔ/Selilwitulh (Tsleil-Waututh) Nations or what is commonly referred to as Vancouver, BC.