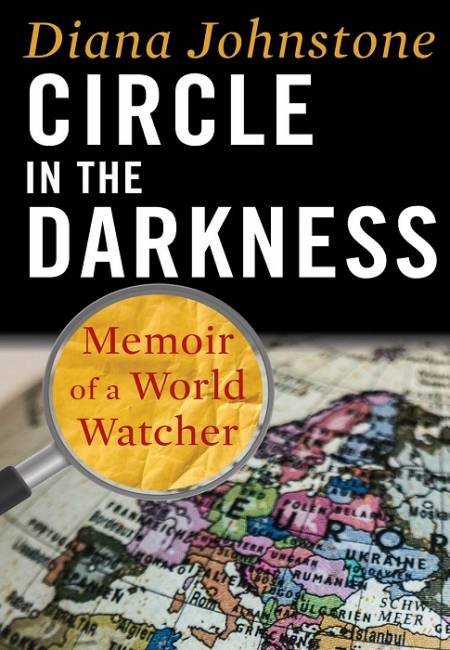 “… not only a fascinating window into a contemporary event, but also a blistering attack on the Left, which she argues, correctly, betrayed its historical role as a champion of social justice and peace, replacing it with the boutique activism of identity politics, political correctness, and what has become known as humanitarian intervention.” —CHRIS HEDGES

“Diana Johnstone’s just published book, Circle in the Darkness: Memoir of a World Watcher, is the best book I have ever read, the most revealing, the most accurate, the most truthful, the most moral and humane, the most sincere and heartfelt, and the best written.  Her book is far more than a memoir.  It is a history that has not previously been written.” —PAUL CRAIG ROBERTS

“Diana Johnstone is a superb reporter of a kind and caliber that barely exists today. Her principled, eloquent memoirs are often touching, and wise, and bracing in their truth in an age of deceit.” —JOHN PILGER, award-winning Australian journalist, author and broadcaster/documentary maker

DIANA JOHNSTONE, Ph.D. A native of Minnesota, raised in New Deal Washington, has spent more than half her life in Europe as a political observer and journalist, working for Agence France Presse, for In These Times as European Correspondent, and as press officer for the Green Group in the European Parliament. She holds a BA in Russian Area studies and a PhD in French literature. She is author of three books including Fools’ Crusade: Yugoslavia, NATO and Western Delusions., and coauthor with her father, Paul H. Johnstone, of From Mad to Madness: Inside Pentagon Nuclear War Planning