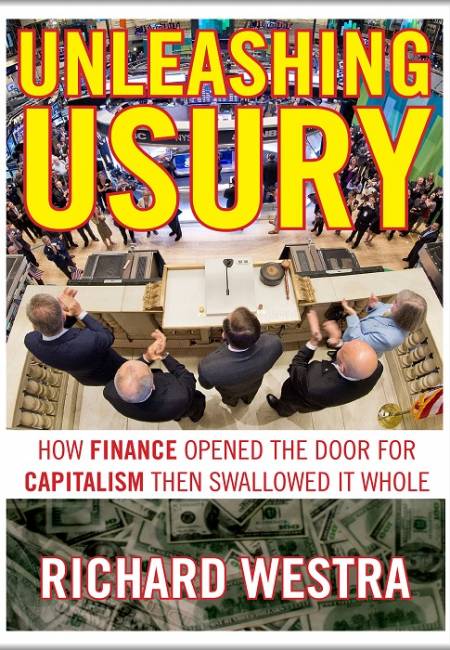 “Unleashing Usury is a must read for those concerned about the increasing financialization of the global economy. ‘Usury’ got its deeply negative connotations in the Middle Ages, when Christianity viewed it as out and out evil. Westra argues that this was not simply some kind of naive bias on the part of Christianity, since the dog-eat-dog trends of usury did play a role in undermining medieval civilization. In this book he presents forceful arguments backed by strong historical evidence to demonstrate that the capitalist financialization we are now experiencing is far worse than the medieval breed of usury. This is because of the extent to which the unleashing of usury has penetrated global life with deep wounds, wounds that because of their depth and breadth will be difficult to heal.”
ROBERT ALBRITTON, Professor Emeritus, York University

RICHARD WESTRA is Designated Professor at the Graduate School of Law, Nagoya University, Japan and Visiting Professor at the Institute of Political Economy, Carleton University, Canada. He has authored and edited 13 books and is co-editor of Journal of Contemporary Asia. His Ph.D. was completed in 2001 at the Department of Political Studies, Queen’s University, Canada. Among his numerous international publications he authored The Evil Axis of Finance, Clarity Press, 2012 and Exit from Globalization, Routledge, 2014.