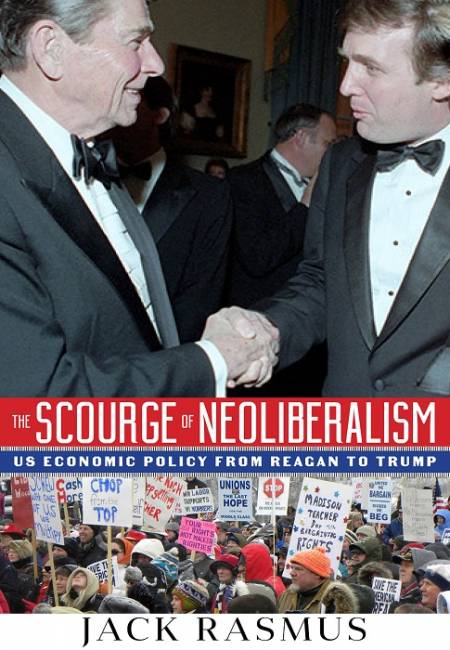 While the capitalist system has undergone numerous restructurings throughout its history, the capitalist elites’ purpose in elaborating these changes has remained the same:  to restore and/or extend their hegemony over domestic class and global challengers. The current systemic designation, operative since 1978, is “neoliberalism,” deployed to obfuscate what in actuality is US imperialism and domestic class warfare.

Analysis of the actual compass of these policies has remained truncated, focused on fiscal policy and austerity to the exclusion of the economy’s monetary, trade, finance, and industrial dimensions.  Furthermore, an examination of the causal relations between neoliberal economic policy evolution and changes in the US political system is lacking.  This book seeks to address these lacunae.

“Rasmus excels at economic history. His brief account of American economic history since 1900 rings true. His baseline is that economic structures are not static but constantly changing to control an evolving economy as well as political changes… The Scourge is a powerful, important book. We ignore it at our peril.”  DAVID BAKER, ZMag

JACK RASMUS is the author of several books on the USA and global economy, including Central Bankers at the End of Their Rope and The Scourge of Neoliberalism. He hosts the weekly New York radio show, Alternative Visions, on the Progressive Radio network; is shadow Federal Reserve Bank chair of the ‘Green Shadow Cabinet’ and economic advisor to the USA Green Party’s presidential candidate, Jill Stein. He writes bi-weekly for Latin America’s teleSUR TV, for Z magazine, Znet, and other print & electronic publications. Dr. Rasmus studied economics at Berkeley, took his doctorate in the University of Toronto (1977), and worked for many years as a union organizer and labour contract negotiator. He currently teaches economics and politics at St. Mary’s College in California.