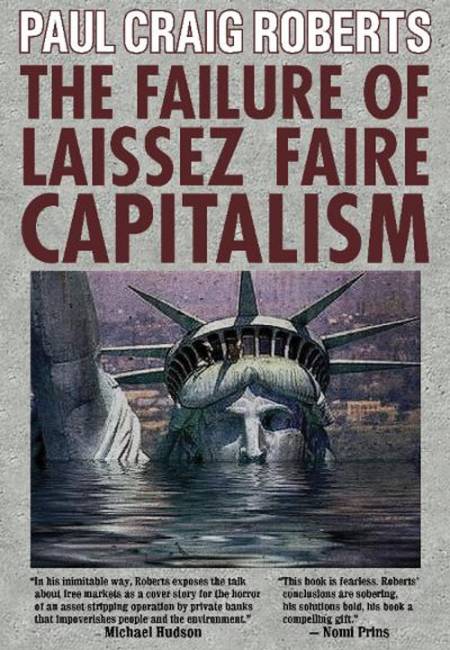 This book is a major challenge both to economic theory and to media explanations of the ongoing 21st century economic crisis. It outlines how the one percent have pulled off an economic and political revolution. By offshoring manufacturing and professional service jobs, US corporations destroyed the growth of consumer income, the basis of the US economy, leaving the bulk of the population mired in debt. Deregulation was used to concentrate income and wealth in fewer hands and in financial corporations “too big to fail.”

“The Failure of Laissez Faire Capitalism is fearless. It transcends Roberts’ illustrious career and prior works of intellectual and practical analysis.” NOMI PRINS, author of All the Presidents’ Bankers

“In his inimitable way, Roberts describes how the rhetorical patter talk about free-markets is a cover story for the horror of an extractive asset-stripping operation by publicly-supported private banks and the governments that they control that impoverishes people and the environment. He shows that unrealistic assumptions made by free-trade ideologues have led to the “New Dispossession” and a political and economic race to the bottom, applauded as a success story by junk economists, who ignore the reductions in living standards and rise in environmental instability.”  MICHAEL HUDSON

PAUL CRAIG ROBERTS was Assistant Secretary of the US Treasury in the Reagan administration, a member of the US Congressional staff, associate editor and columnist for the Wall Street Journal, columnist for Business Week, the Scripps Howard News Service, and Creators Syndicate, Senior Research Fellow, Hoover Institution, Stanford University, and was appointed to the William E. Simon Chair in Political Economy, Center for Strategic and International Studies, Georgetown University.
He is chairman of the Institute for Political Economy and author or coauthor of ten books and numerous articles in scholarly journals. He has testified before committees of Congress on 30 occasions. Dr. Roberts was awarded the US Treasury’s Meritorious Service Award and France’s Legion of Honor.