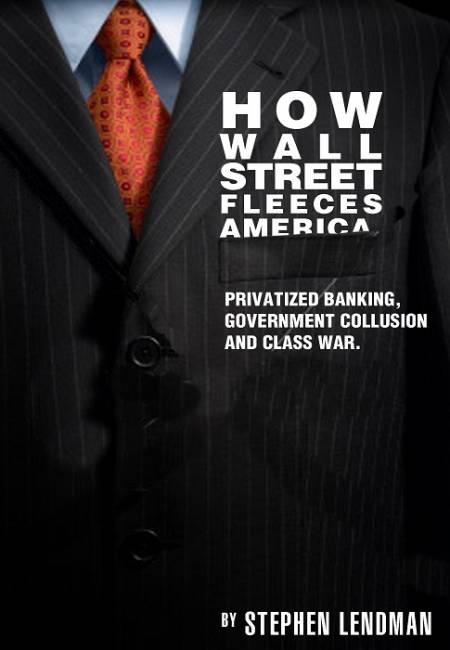 This book provides a powerful tool for showing angry Americans how they’ve been fleeced, and includes a plan for constructive change.

“Stephen Lendman has been tireless in exposing the hidden forces behind the news, on everything from political economy and human rights to social justice and workers’ rights. His writings draw from a wealth of knowledge and deep conviction. I’m delighted to see him tackle the problem of private banking and government collusion and what I believe is the key to the solution: public banking.”

“I think this text is terrific, just what is needed, very clear, informative beyond most people’s ken, easy to read, and of ultimate importance to steering economic and political recovery. The Capitalism and Freedom chapter is right in biopsy. The book just keeps on going with brilliant full exposure.”
JOHN McMURTRY, Unequal Freedoms: The Global Market as an Ethical System

STEPHEN LENDMAN is a writer and broadcaster. His work is exceedingly widely distributed online, with his articles carried on numerous listservs and websites such as Information Clearing House, Countercurrents, Rense, AltNews, Uruknet, Global Research, Counterpunch, and more. Lendman was awarded the Mexican Press Club’s International Investigatory Journalism Award in 2011. The awards ceremony was televised throughout Latin America. This book and Banker Occupation have been released in Chinese editions. He holds a BA from Harvard and an MBA from Wharton.