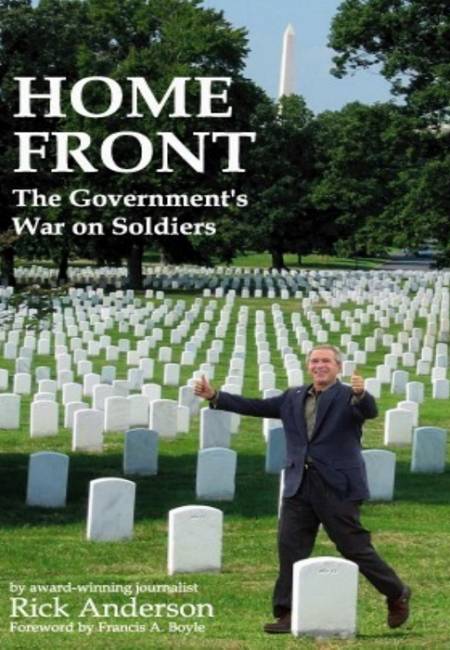 Home Front reports the widespread effects of the government’s weapons, medicines and bureaucracies of mass destruction: the use of vaccines that have led to mysterious deaths among both troops and civilians, and the likely emergence of Gulf War II Illness, a cocktail of ailments similar to Gulf War I Illness––the modern day version of Vietnam’s Agent Orange. It details the health and medical issues facing American military personnel and veterans, and investigates the military/bureaucratic politicking behind them. It includes comprehensive documentation from the CDC, VA, and Pentagon to explain the illnesses, syndromes and symptoms, and provides insight into veterans’ battles over medical services, intractable policy, and VA hospital conditions. Public and classified military experiments are detailed along with the “friendly fire” effects of anthrax vaccine and depleted uranium.

“Use ’em, abuse ’em and lose ’em. This has been the U.S. military mantra since before George Washington slapped on a pair of boots. This brilliant work documents it all. A searing condemnation of an ungrateful nation.” DAVID H. HACKWORTH, Colonel, U.S. Army Retired

RICK ANDERSON  is a former San Francisco Chronicle sportswriter and an ex-news columnist for the The Seattle Post-Intelligencer and The Seattle Times – where he won the Heywood Broun award for columns about the underdog. He is a winner of the National Association of Black Journalists Award for Investigative Reporting, the Association of Alternative Newsweeklies national award for news reporting. His work has also appeared in Mother Jones, The Village Voice, Sports Illustrated, LA Weekly, Vice News/New York, and Salon.