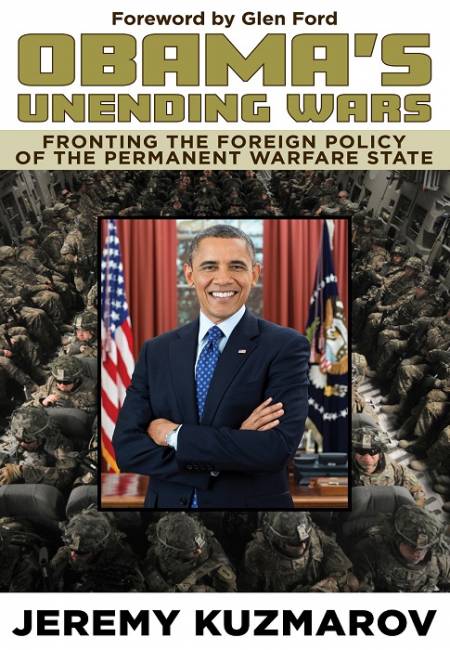 “Kuzmarov’s book is serious and fair and should prompt historians — and the rest of us — to reevaluate Obama’s legacy.” —BRIAN D’HAESELEER, Washington Post

“In ways no one else has done, Kuzmarov punctures Obama’s phony liberal and humanitarian veneer and skillfully deconstructs the carefully crafted Obama creation myth…” — PETER KUZNICK, co-author with Oliver Stone of The Untold History of the United States
“Barack Obama seemed skeptical of militarism, but then bombed Libya & Syria, sent more troops to Iraq and Afghanistan & escalated Cold War with Russia. Why and how? Read Obama’s Unending Wars: Fronting the Foreign Policy of the Permanent Warfare State.” — STEPHEN KINZER

“Kuzmarov shows how many white progressives, who, in their anxiety to reject any racist appearance, embraced this warmongering president. Obama also convinced most African-Americans to give him leeway to do them justice, which he never did. ” — RON RIDENOUR, Black Agenda Report

JEREMY KUZMAROV is author of three previous books on U.S. foreign policy including: The Russians are Coming, Again: The First Cold War as Tragedy, the Second as Farce, with John Marciano (Monthly Review Press, 2018), Modernizing Repression: Police Training and Nation Building in the American Century (University of Massachusetts Press, 2012) and The Myth of the Addicted Army: Vietnam and the Modern War on Drugs (University of Massachusetts, 2009). He has been a blogger with the Huffington Post and contributed articles to The Progressive Magazine, Counterpunch, Roar Magazine, Z Magazine, the LA Progressive as well as academic journals and local newspapers in Oklahoma. He is also a co-author of essays on Korean, Vietnam, Reagan's Central American wars and World War I for a peace history website.