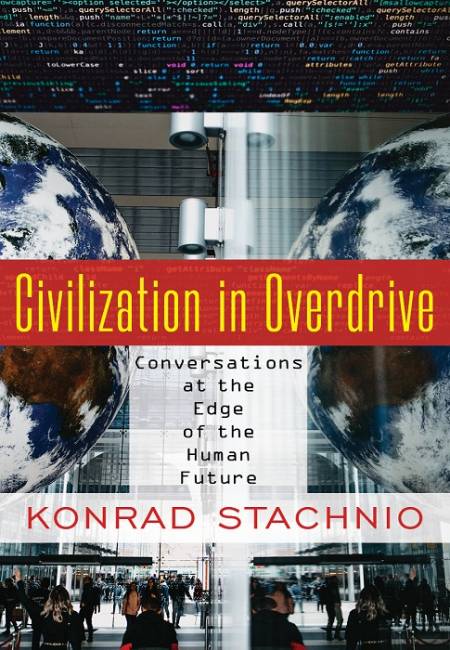 “Interesting interviews in this book about the future of the world including #degov #bitcoin #crypto.” TIM DRAPER, Venture capitalist

“A conversation that explores new frontiers of politics and technology, as well as depicts the shadowland of our unfolding strange and ominous future as a species.” RICHARD FALK, Public Intellectual

CIVILIZATION IN OVERDRIVE: Conversations on the Edge of the Human Future provides an astonishing tour of how the world’s future looks to those likely to know the most about it.  Journalist Konrad Stachnio engages 17 experts, global opinion leaders in their respective fields, in discussions on artificial intelligence, finance, the economy, technology, world order, the military, cultural change and more. His well-researched and probing questions draw out striking revelations from his guests on where 21st century civilization is leading us, raising further questions as to whether we want to go there, and if that could be prevented.  This book is a plunge into the unexpected, forcing us to bid farewell to our familiar yet increasingly complex world which is irrevocably disappearing before our eyes and morphing into dimensions even more complex and less comprehensible. Interviewees:  Alexandr Dugin, Alain de Benoist, Andrei Raevsky, Carine Hutsebaut, Catherine Austin Fitts, Douglas Rushkoff, Erik Davis,  Sheikh Imran Nazar Hosein, Rabbi Joel David Bakst, Jack Rasmus, John Perkins, Mikhail A. Lebedev, PhD, Paul Craig Roberts, Richard Falk, Tim Draper, Thomas Campbell, and William Binney

KONRAD STACHNIO is an independent journalist whose main interests include AI, science, geopolitics, armed conflicts, terrorism, broadly understood social and cultural changes in the world. He collaborated with news websites such as New Eastern Outlook and Vice. His articles have been reprinted and translated into many languages: Italian, Spanish, French, Norwegian, Russian, Hungarian, Czech etc.